Nothing says love like having a dog.  For most of us dog owners, nothing says movie night like a good dog flick.  So bring out the dog bones and the popcorn and check out the list of Dog movies you can stream on Netflix. This cheesy title and catch phrase is not all this movie has going for it.  This little doxie takes on big competition could he be the Wiener?  (sorry that was cheesy too!) 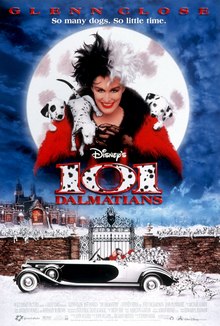 This 1996 live action family comedy starring Glenn Close and Hugh Laurie. The story follows closely to the animated movie plot, where the dogs are dog-napped by the one and only Cruella de Vil who plans on making coats out of the “puppies”.  Hi-jinks and mayhem ensue as they search for the puppies and their safe return. This is an all time favorite.  This unlike three-some made up of wise old Shadow a Golden Retreiver, a Himalayan Cat who has the attitude just as her name suggest “Sassy” and Chance and American Bulldog who is young and not used to having a family.

Released in 2012 this movie takes place in Transylvania (which can only mean one thing).  A pooch mistakenly partakes in a concoction that transforms him into a vampire.  Watch the movie to see how is quest to return to normal goes.

As a participant in the Amazon Services LLC Associates Program, this site may earn from qualifying purchases. We may also earn commissions on purchases from other retail websites.