Coming to America Now on Netflix!

Akeem, the Prince of Zamunda ( a fictitious African kingdom)  becomes rather tired of his luxurious living where servants do his bidding everyday all day.  Akeem’s parents have even arranged his marriage to a girl he has never met but is trained to obey his every word .  Akeem’s plan becomes clear he will travel to America with his best friend/personal assistant Semmi (played by Hall) to find an intelligent and independent woman.  Once in America the comedy continues as Akeem looks, finds and tries to win the girl. 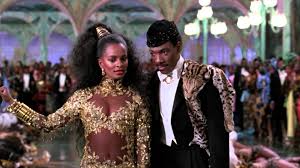 The Soundtrack consisted of these songs being released as “Coming to America” by The System, “Better Late Than Never” by The Cover Girls, “Come into My Life” by Laura Branigan and Joe Esposito and  “That’s The Way It Is” by Mel & Kim.  The Coming to America Soundtrack was released in 1988.

The Soundtrack is still available on Vinyl.

Although Coming to America was not as popular with fans like Trading Spaces, Nutty Professor or 48 hours the movie was a solid performance.